Subscribe to my newsletter and never miss my upcoming articles

If you are a web developer or simply a software developer whose in need to quickly beautify your project fastly then, congrats you arrived to the right place.

This post is all about - "one place for most useful CSS tools".

HashCSS is a one in all css tools that somehow ,you will need as a frontend developer or maybe any software developer.

The main goal of the project is to provide developers including beginners students a place where you will get the required css tools all in one place, no rubbish anymore.

This project is fully open-sourced and is a submission for the Hashnode + Netlify hackathon Feb 2022.

Get the app here

The app contains useful css tools to customise and get the generated css code easily.

You get a web UI app where you can customize various css effects and see the changes real time and ofcourse can grab the generated css codes to use in your next project.

All coded with only 2 aims simplicity and customizability.

As the tagline says - "Build the future of the web"

Which describes it all, Netlify unites an entire ecosystem of modern tools and services into a single, simple workflow for building high performance sites and apps.

So, if you wanna deploy your next project then must visit Netlify now!

If you want to read thier documentation then, refer Netlify Docs

Yes , its fully customisable and there are certain settings which you may further configure accordingly. 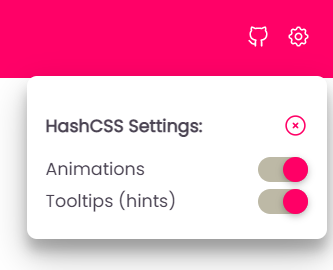 The UI is kept clean and dry. The customising tools have been there only as required so that even beginner can use in a very hazzle free manner.

"only as required" - means that less tuning tools so less confusion and better productivity.

Glassmorphism is a term that is used to describe UI design that emphasizes light or dark objects, placed on top of colourfull backgrounds.

A background-blur is placed on the objects which allows the background to shine through basically , giving it the impression of frosted glass.

Just tune some rangebars according to your needs , pick a color and hola copy the generated code.

See, its that simple.

So, what are you waiting for ? Must have a try on the website it hardly takes a minute or less.

How many tools are there ?

There are 4 tools currently and there is also an add on for animations.

Below is a list of all the features that this app contains. 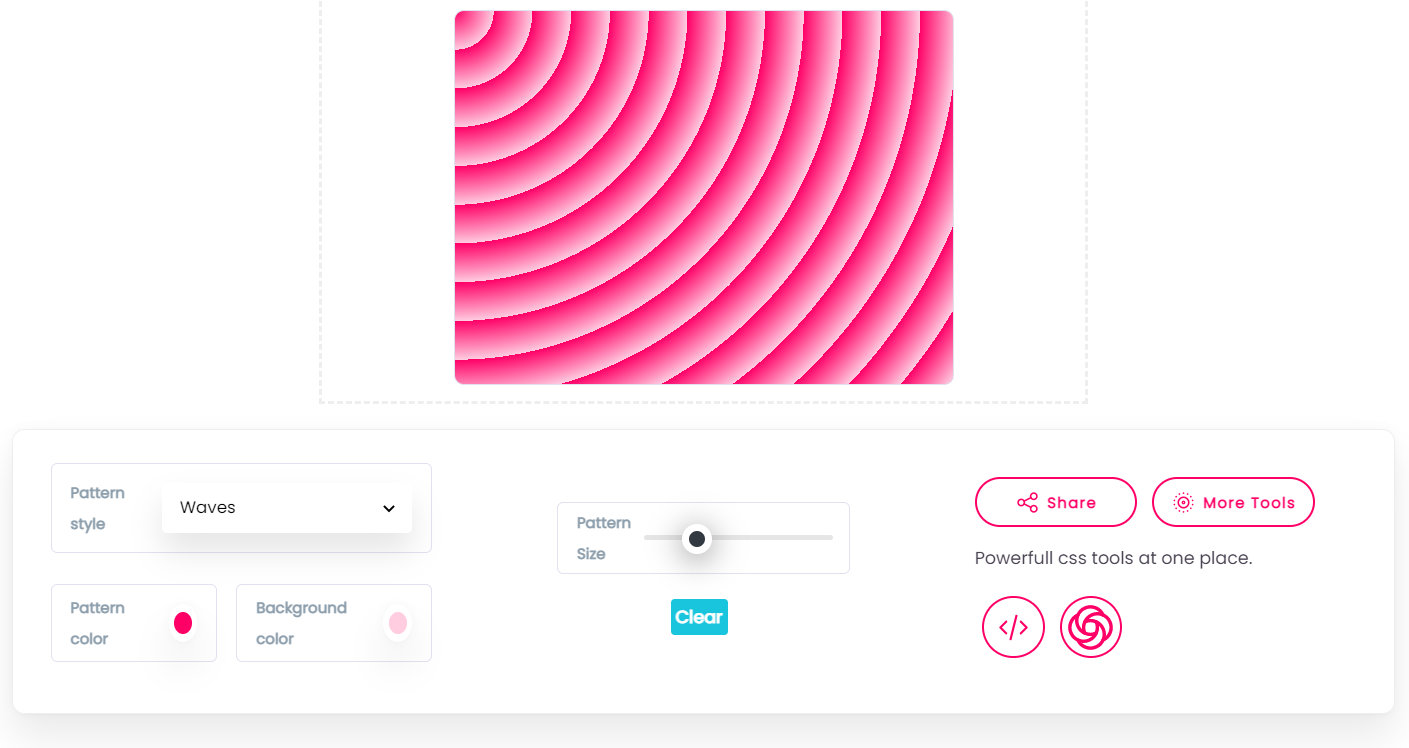 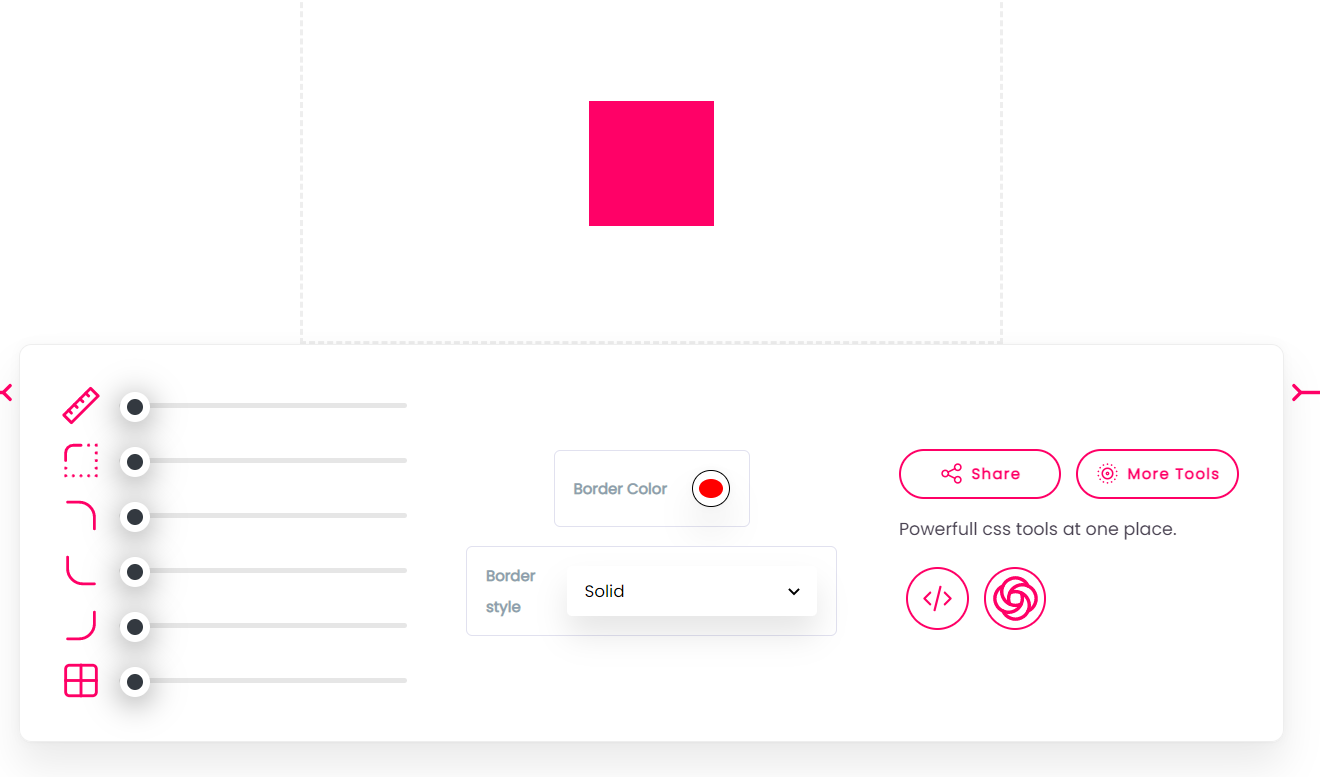 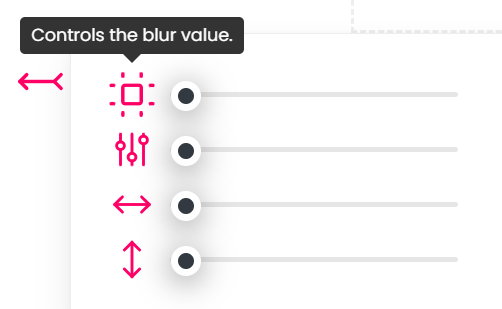 Is it mobile friendly ?

Yes, its 100% responsive app. Its UI is mobile friendly , convenient to use for everyone. 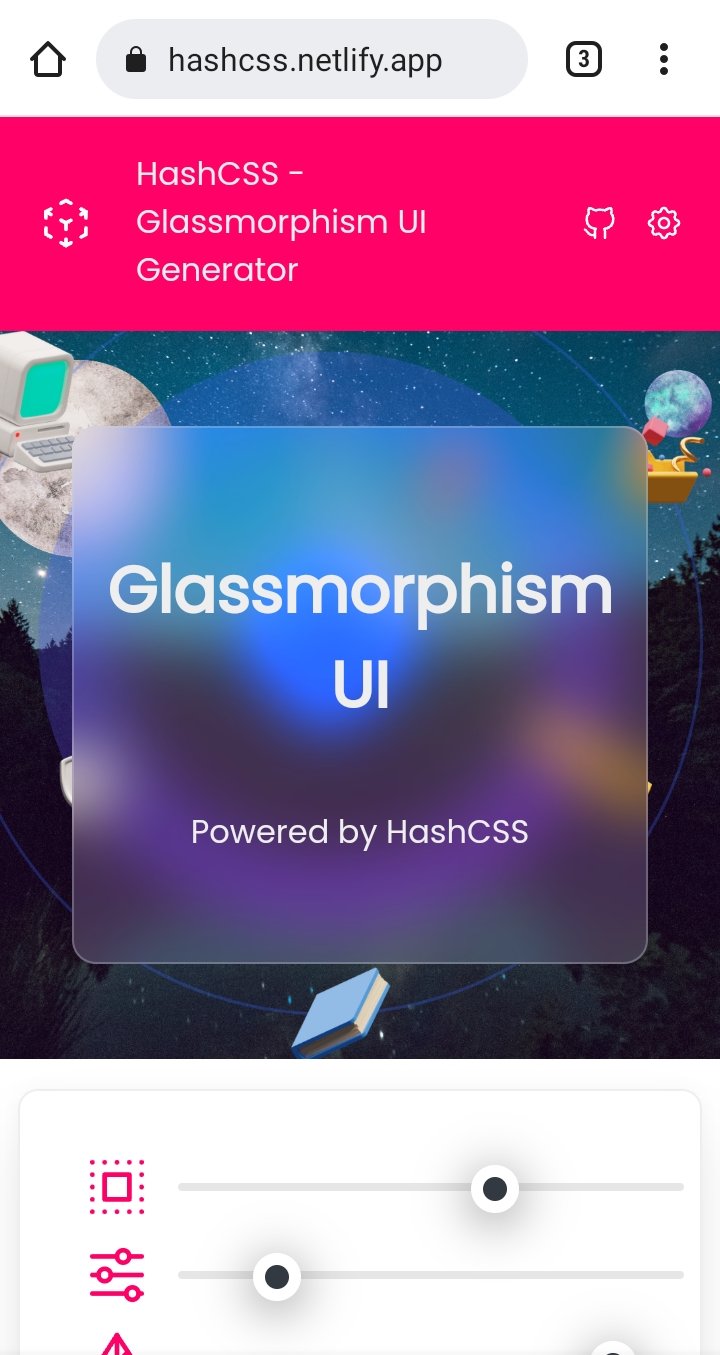 Below are descriptive examples of the tool usage and outputs. 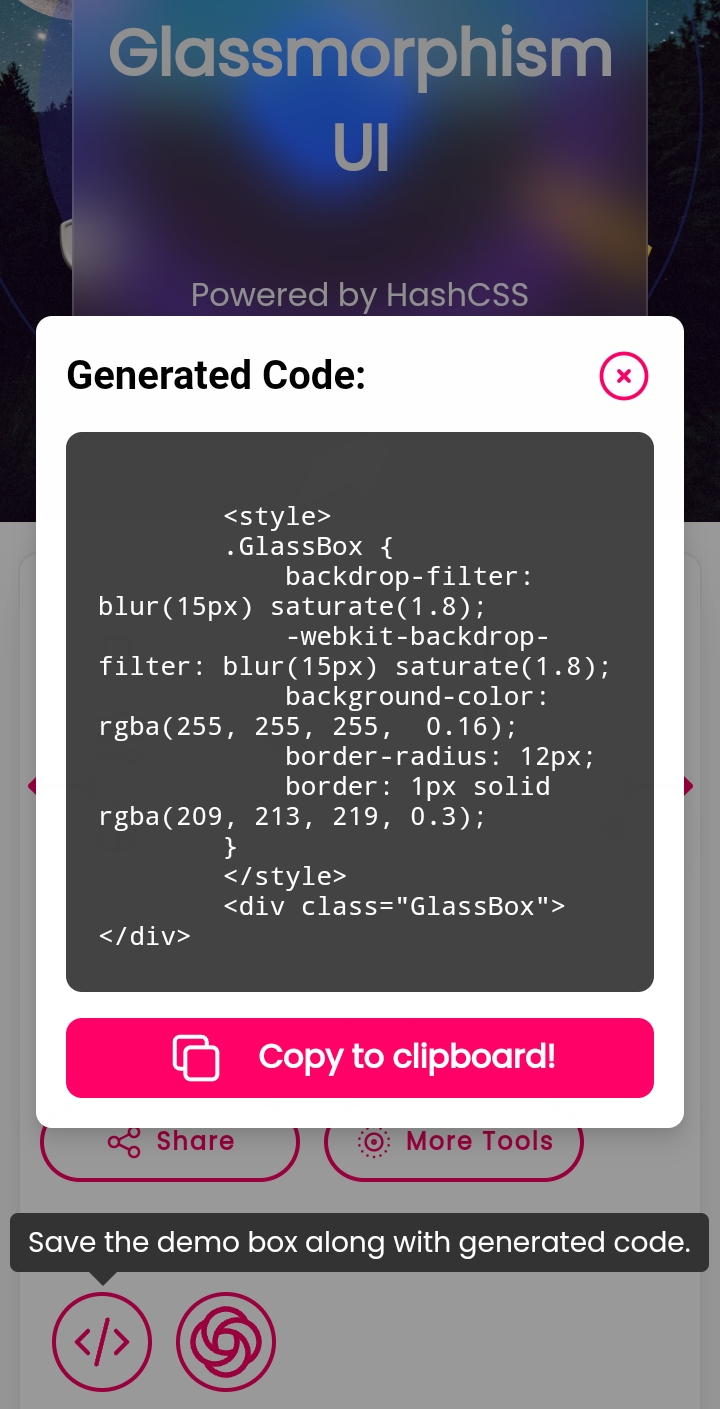 And grab the generated CSS output:

Go ahead to below link to use the background pattern generator: 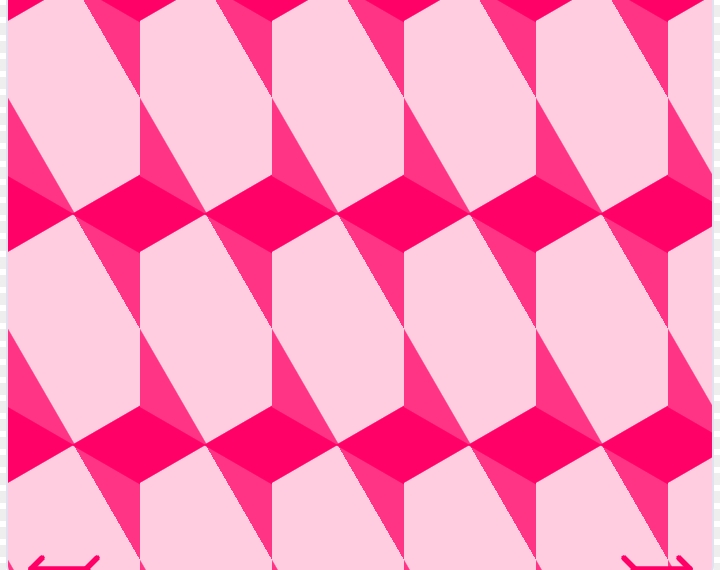 Pick a pattern and grab the generated code:

There are many more patterns , go have a look at them.

Borders shape a lot in the interface of any web app , have the right borders leaves a massive impact on your users. 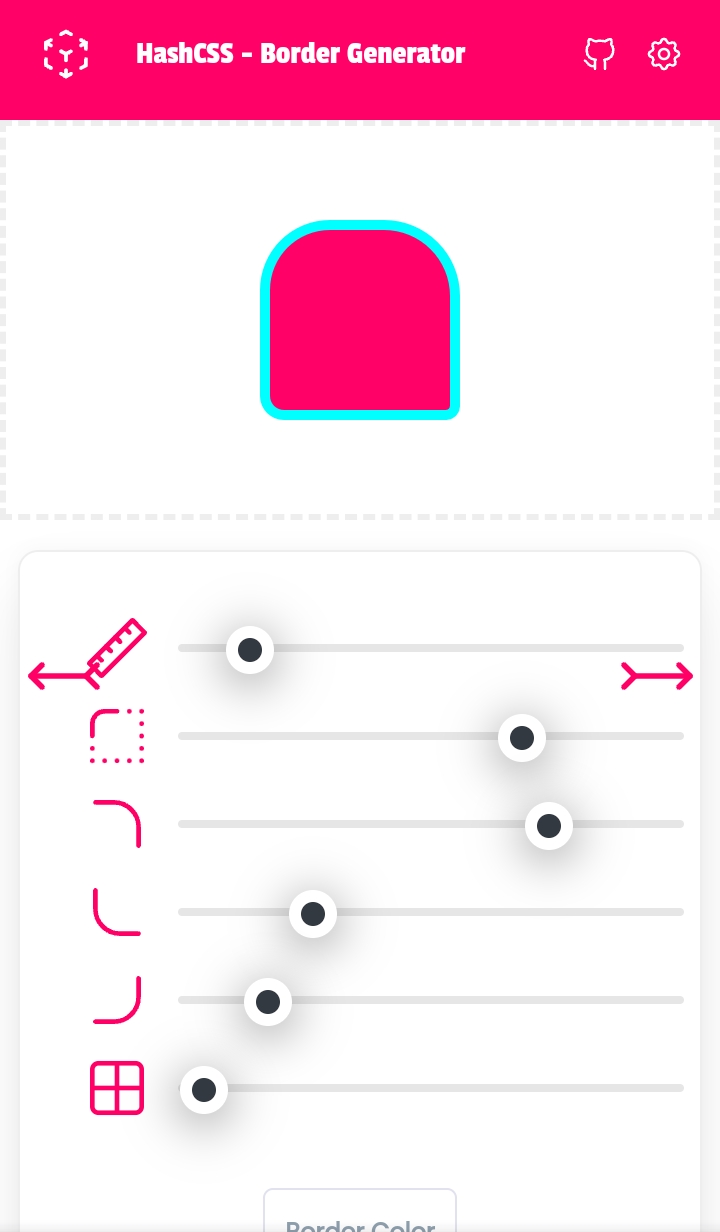 So, use this tool wisely.

Below is the generated code in this case:

In short , you may basically use the below snippet to style the element.

The last but not lease is the shadow generator tool, i think its name is enough to describe about it.

See above is the shadow effect. 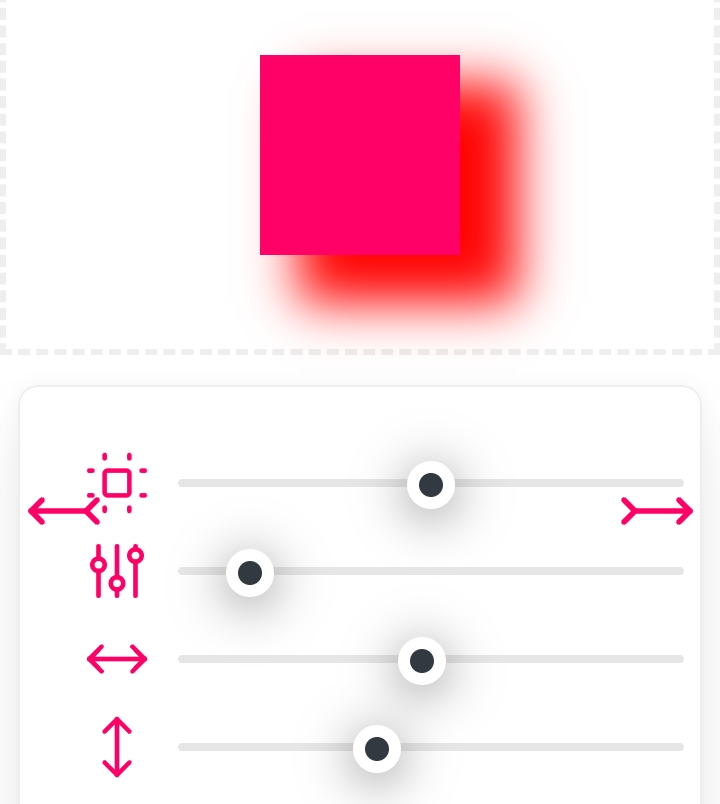 And below is the code that's get generated.

Simply , you may use the below snippet to add the shadow effect.

How you may configure settings?

The app also supports some configuration which, you may simply set using the setting button in the navbar.

BUT, wait how does it saves the settings?

Its quite simple using the browser's localStorage.

The animation setting is saved by creating a #anim id var in the storage.

Similar for the other one.

And then using the JSON.parse() method to parse the values as they are stored in json objects.

I hope , you get to learn something new from this!

Below is the description of the stack being used.

Apart from css tools , there is something even more amazing for you that is customizable built-in animations.

Motionia.js (Motionia is a lightweight simplified on demand animation library!) is a js library which you can use to create beautiful css animations by just one line of code, yes you heard right.

This is a project which i created last year , through which you may pick a animation and customize it accordingly through a efficient js api.

Just include the script into the head of your project and animate anything including attributes etc, by just few lines of codes.

Or you may use the javascript for some reasons to add the animation dynamically.

You may visit the GitHub repo for more information.

The main goal of the project is to motivate new developers to master how things work in real UI that is, what sorts of code effects what in css.

There are many tools available in the web , but this one is created by keeping in mind the simplicity & up to the point concept.

Thanks for conducting this hackathon.

Get the app here